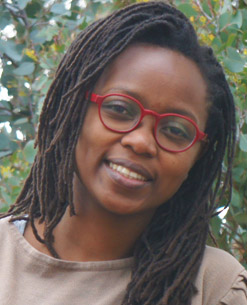 Dr. Chachage is an immunologist at NIMR-MMRC and a team member of TB Sequel network. Together with the Gambian scientists, Dr. Chachage will co-lead the “host” research task in the TB Sequel network to investigate causes and mechanisms underlying lung inflammation resulting in sequelae of pulmonary tuberculosis and treatment outcome, and define predictive biomarkers for TB-sequelae.

Dr. Chachage’s research interest is on human immune responses to infectious diseases. Over the past seven years, she has studied and published on immunologic interactions between HIV and other pathogens with a particular focus on cellular immunology.

Dr. Chachage obtained her PhD in International Health_Immunology at the Ludwig-Maximilians University in Munich-Germany in 2013, where her research (which was based in Tanzania) focused on the immune-alterations caused by HIV and helminth infections and the effect of treating for helminths in reducing HIV acquisition and disease progression.

Upon the completion of her PhD, she was promoted to lead the immunology laboratory at NIMR-MMRC, which focuses on, development of novel TB immunodiagnostics, immune monitoring affords during future HIV vaccine trials and also more basic immunopathogenesis studies such as the HIV-HPV interaction study. Dr. Chachage has also been a laboratory research coordinator and a senior scientist within the “HIV and HPV interaction” study and has lead efforts to characterize HPV-specific T cell responses in relation to HPV disease, and to HIV and HAART status at NIMR-MMRC and at the Vaccine Research Center, NIH in Bethesda, USA before she secured a post-doctorate position at the Burnet Institute, Melbourne, Australia.

Her post-doctoral work in the laboratory of A/Prof Anthony Jaworowski (2015-2016) focused on investigating the role of natural killer cells and Monocytes in immunity to and pathogenesis of human infectious disease, with a particular focus on HIV and malaria infections.

Dr. Chachage has also been involved in mentorship programs for junior scientists at NIMR-MMRC and is a regular lecturer at the Nelson-Mandela Institute of Science and Technology in Arusha, Tanzania (NM-AIST), where she teaches a post-graduate course “Immunology of Infectious diseases”.