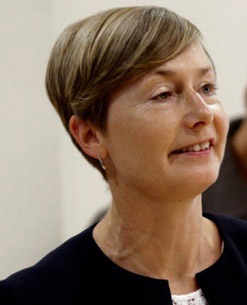 Prof Kampmann is the PI for the MRC site in The Gambia and the work package leader for the Capacity Development Task. In addition, she has a key interest in the host immunity studies and aims to interact closely with the laboratory-and field based scientists and clinicians.

Prof Kampmann holds a Chair in Paediatric Infection & Immunity at Imperial College, London, UK and was appointed as the Theme Lead for Vaccines & Immunity research at the MRC Unit The Gambia at LSHTM in July 2010. She has set up an “Open Lab” approach between Imperial and The Gambia, where science and personnel can freely interact and projects can take advantage of available resources on either end.

Originally trained as a Paediatric Infectious Diseases clinician in Germany, France, UK and the U.S., she directs a comprehensive tuberculosis and vaccine research program both in the UK and sub-saharan Africa, where she holds an MRC program grant for childhood TB studies. During her Wellcome Trust-funded PhD, she developed a novel model to measure host-pathogen interactions using reporter-gene tagged mycobacteria, applicable to field evaluations of TB vaccines and immunopathogenesis studies in children. She has extensive practical and research experience in childhood infection and immunity for >15 years and brings an established funding track record as PI and co-applicant from major international funders for the conduct of laboratory-based and programmatic research in tuberculosis research in both resource-poor and -rich settings. In 2009, she set up the ptbnet, a European network of clinicians and scientists working together in childhood TB in now 21 countries on Europe. In 2015, she set up the Centre for International Child Health @ Imperial.

Her work interacts closely with the National TB programs in The Gambia and the UK and agencies interested in the development and subsequent delivery of novel diagnostics for TB such as FIND and PATH. She acts as an advisor on childhood TB and immunity to the NIH, the WHO, the European Respiratory Society and the British Paediatric Allergy, Infection & Immunity Group and chairs the scientific advisory committees of the German Centre for Translational Medicine (DZIF).

She has published over 150 peer reviewed papers and several book chapters in childhood infection &immunity, including TB and vaccines and holds a patent for a specific biosignature for the diagnosis of childhood tuberculosis.

To develop the next generation of young investigators is very important to her, and she currently supervises 6 PhD students, with 4 being from West Africa.